The Republic of Liberia

Hon. Chief Moses Yarkpazuo Kollie is a professional Public Administrator with over twenty-Five (25) years of public service and twenty (20) years of practical managerial skills, National and International Experienced Legislator. He has an exceptional and specialized training in Financial & Economic Management, Budgeting, Good Governance and Taxation from the West African Institute of Financial and Economic Management (WAIFEM) in Lagos, Nigeria. He is a former Minister of Labour of the Republic of Liberia.

As Minister of Labour, Hon. Kollie worked successfully since 2018 in upholding and ensuring the full implementation of the Decent Work Act of Liberia(DWA), the smooth and impartial adjudication of Labour cases and also hosted the first National Labour conference which further foster and encouraged policy discussions towards a united Labour sector; bringing together the National Tripartite Council(NTC) of the Labour Sector of Liberia; comprising of; Representatives of Employers’ Association; Representatives of Employees’ Association and the Government of Liberia.

Professionally, Hon. Kollie has held several top level postilions in both Public and Private Sectors with his appointment by the President of Liberia; Dr. George Manneh Weah in February 2018 as Minister of Labour and now appointed Director General of the Liberia Civil Aviation Authority(LCAA).

Being passionate about the transformation of his country as Minister of Labour, Hon. Kollie along with his team took   practical steps which led to the rebranding of the image of the Ministry of Labour and restoring its positive reputation, transforming the Labour Sector of the country through the implementation of the Decent Work Act of Liberia in line with the Pro-Poor Agenda for Prosperity and Development(PAPD).

Prior to his appointment as Minister, the distinguished national and selfless leader was overwhelmingly elected as Representative in 2005 & 2011 representing the people of Electoral District number four (4); now District number five (5), Salayea & Zorzor Administrative Districts, Lofa County, Republic of Liberia. As Representative, he severed for Twelve (12) unbroken Years (2006 -2018)

While serving as legislator, he also Chaired the Committee on Investment & Concessions for Six years, at the same time served as Head of Delegation for nine years to the African, Caribbean, Pacific and European Union Joint Parliamentary Assembly (ACP-EU/JPA) based in Brussels, the Kingdom of Belgium.

During his twelve (12) years of service at the House of Representatives, Hon. Kollie also served as Member on the House’s National Budget Committee for Ten (10)   Years and later became Chairman for Two years of said Committee. Additionally, he also served as Chair of the Lofa County Legislative Caucus for several Years.

For eight years, Hon. Kollie provided leadership as Chairman of the Board of Directors of the Curran Lutheran Hospital, located in Zorzor District, Lofa County, Liberia.

As a Civil Servant, Hon. Moses Y. Kollie served as Customs Officer and Chief Cashier at the Ministry of Finance (MOF), now Ministry of Finance & Development Planning (MFDP) for Eleven (11) years at several Ports of Entry across Liberia including the Roberts International Airport (RIA).

He also served as First Vice President of the Civil Servants Association of the Republic of Liberia; 1989-1990 served as Warehouse Manager at then Liberia National Petroleum Corporation (LNPC). 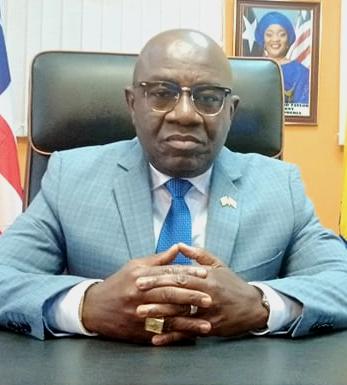 Unless otherwise noted, you may republish our content for free. Please give credit to our source (for web, with direct link, for print with Liberia Civil Aviation Authority).